Minnesota Awesome, the local, family-owned Minnesota-themed apparel and accessory company, has just launched the MN Brewery Shirt Club. This is a monthly membership box that is designed to promote local Minnesota breweries and encourage Minnesotans to visit a variety of breweries that they may not normally venture to. Each box contains a t-shirt featuring that month’s brewery, along with a sticker, a printed bio of the brewery, and a coupon to use in their taproom.

Minnesota Awesome partners with each brewery to come up with the contents of the box each month. Once colors and designs are finalized, the contents of the box are printed, packaged, and sent from Minnesota Awesome’s facility in Edina, MN. The boxes are $28 and ship for free.  In order to ensure a fun surprise each month. the featured brewery is not revealed until all boxes have been received by its members. 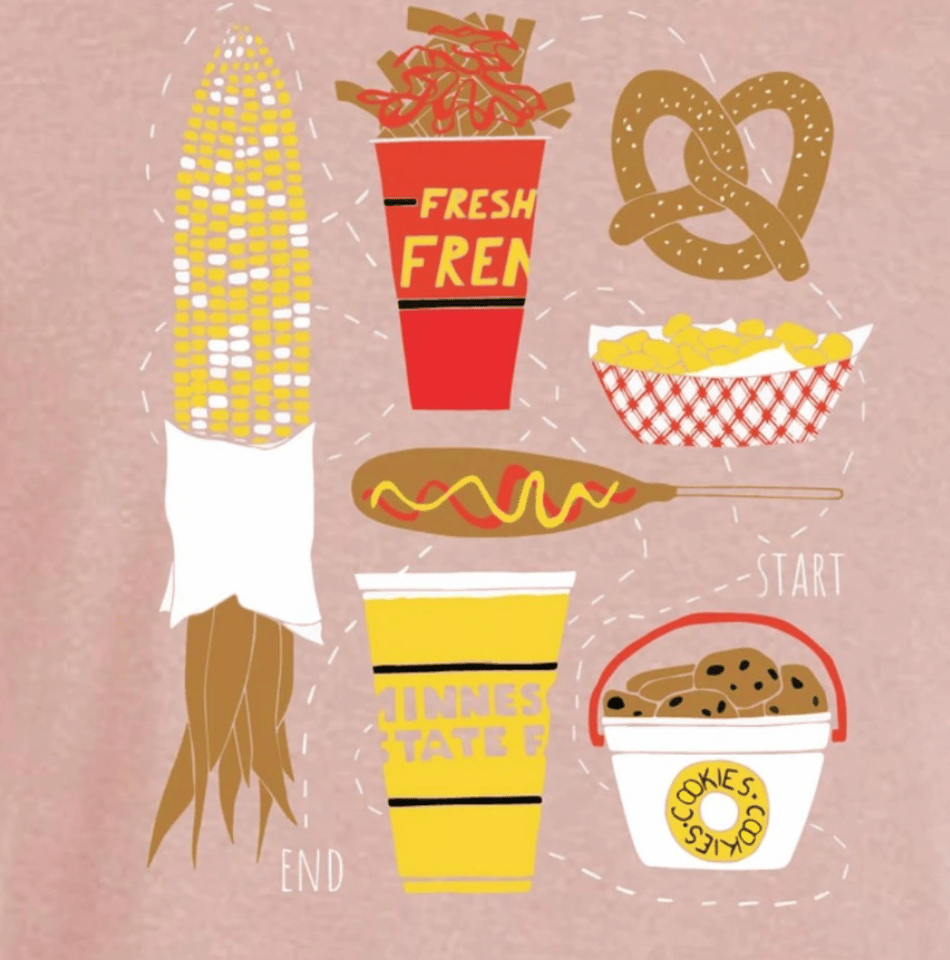 Stephanie Hansen 0:12
Hello, everybody, and welcome to the makers of Minnesota podcast where we talk to cool people doing cool things. And today I am talking to Dan Gordon. And we are talking about a subscription box that is really perfect not just for men, but for women too. It is a beer club subscription box, based in all of the cool art that we’re seeing at the breweries and their logos. And I’m just I’m excited about this. Because one of the things when you buy a beer in a liquor store and you buy in Minnesota beer, like the labels such a big part of it, you guys are doing a great job of just making us aware of all the cool beer that’s happening in the Twin Cities. So tell us about your box.

Dan Gordon 0:55
Yeah. So our box is, you know, basically it’s a monthly subscription service or membership that each month you get, we pick a different Minnesota brewery, we partner with them to design the t shirt sticker, like a vinyl decal that’ll weatherproof everything and you get so you get a shirt, a sticker, a little card that has the brewery bio on it, and then also a coupon so for the first two months have been like a buy one get one beer in their tap room.

Stephanie Hansen 1:23
And you guys are an apparel company, Gordon brothers apparel, and you make apparel for like your own Minnesota themed things. And I know it’s not just Minnesota, but what made you guys decide to go this route in terms of a subscription box.

Dan Gordon 1:40
Um, so we actually, you know, we’ll see how we do make the apparel primarily Minnesota related under our brand Minnesota. Awesome. And we just, you know, I was actually reading about something earlier this year on how just how many breweries there are in Minnesota, and

Dan Gordon 1:55
Yep, exactly. So we didn’t see it seems like there’s becoming one in every neighborhood, and everyone kind of has their favorite. And we thought, you know, it’s, well, everyone has their favorite, it’s still fun to visit new breweries try their new beers, see the different atmospheres. And so we just, we thought that this would be a way to encourage people to try different breweries and different beers and, you know, kind of collaborate with the brewery and, you know, they all encourages new foot traffic in their breweries as well. They may not have seen before.

Stephanie Hansen 2:23
And the box is I think it’s 25 bucks a box. 2828 Okay, yeah, yeah. And that includes shipping. And do you have to do the subscription or can you also just buy one off boxes if you see that your favorite breweries featured right now,

Dan Gordon 2:37
if you know, we, we, they’re kind of we we pretty much just make enough for the subscribers. But sometimes we do have a few leftover at the end of the month if they want to reach out for a specific one. You know, you can you can cancel or pause your subscription anytime we make it really easy if you if you don’t want it every month.

Stephanie Hansen 2:54
So your your branded Minnesota awesome. Your T shirts, your sweatshirts, your apparel line, you guys have some really fun graphic designs and some that are sort of becoming iconic. I think in the Twin Cities the Hey babe with babe, the big blue ox is one that I associate with you guys who started the apparel company, and it’s such a competitive business. How do you stand out?

Dan Gordon 3:19
So my brother and I started it in early 2015. Just as a part time we were both in corporate America at the time and just did it to make some to make a little extra money. You know, we were at the time there wasn’t there wasn’t there weren’t as many people making Minnesota apparel, but we were so you know, so it was it was a little bit newer. You know, we were just we happen to be at a mall looking at at a store, just like just a tourist shop. And you know, you know, these are great tourist shirts, but we think we’d like to make apparel that was more, what’s the target market being Minnesotans, not necessarily people visiting from out of state. So we decided to use a high quality poly cotton blended shirt, and just make funny designs with I think our handbag was our first or second design. I think the first three were like a handmade pot versus saying pot versus Sona one and Minnesota Nice. Like we’re first three designs. So yeah, so then we just started printing some shirts and just used social media to promote them. And then all of a sudden, we got in a couple stores and it started taking off. And so then a year about a year, year and a half later, we both were able to don’t start doing it full time in 2016.

Stephanie Hansen 4:28
And who like Do you have one person? That’s the clever person that comes up with creative stuff. And then you find a graphic designer or how does the process work?

Dan Gordon 4:36
We do everything we do everything in house. So my brother and I came up with the majority of the designer both probably half and half. I mean, a lot of it’s sitting around brainstorming we use YouTube videos to teach ourselves Adobe Illustrator and

Stephanie Hansen 4:50
wow, designed that and taught yourself to

Dan Gordon 4:53
Yep, yeah, we try to keep as much of everything in house as we can. And now we we also one of our full time places also she she works with her like a warehouse in her online orders but she also her name is Kelly. She also does a lot of designing to she’s very talented. So it’s it’s able to give her an outlet to use her creativity as well. So it’s really a group effort at this point.

Stephanie Hansen 5:15
Is there a shirt slogan that you thought oh my gosh says, I can’t believe this is selling like this or something that surprised you.

Dan Gordon 5:23
We are left with a shirt. If you’ve seen that one. I don’t recall it. So let’s just for anyone who doesn’t know Alexa is a Norwegian. It’s sort of it looks like a tortilla sort of, but but it’s it’s really thin. Typically we have it over Thanksgiving and Christmas, we put butter and and sugar on it and roll it up. And that so we just have one that it’s it’s cartoon laughs and it says, let’s roll. And that one really took off last year when we ran when we came out with it. So we have a couple other laughs of products. I was really surprised at how many that’s all but you know, it’s a niche and people there’s not much left stuff out there. And so people who who kind of No, no,

Stephanie Hansen 6:07
there’s a book about marketing that I’d highly recommend to anybody that’s interested in marketing, and it’s called riches and niches, you find a niche and you’re able to exploit it. And that becomes your differentiator, which is always so surprising. Yeah. Okay, I’ll

Dan Gordon 6:21
definitely have to check that out.

Stephanie Hansen 6:22
Are there shirts that you thought would for sure sell? And then just were a total dud?

Dan Gordon 6:26
Um, yeah, we always we always have a couple of those. I’m trying to think I can’t think of any right right offhand.

Stephanie Hansen 6:34
That’s all right. I just thought maybe there was one that like stood out. My husband and I, when we were naming businesses, we had a postcard direct mail company, and he thought that party pigs was a really great marketing brand and turned out it was a total dud. But for every, you know, 10 ideas that don’t work. There’s maybe one or two that stick and become your moneymakers.

Dan Gordon 6:55
Yeah, yep, yep, exactly. And we tried to come up with, you know, designs we think are good, but a dozen or so are probably more than that every year and definitely aren’t all winners. Actually, what we have one that one that really surprised me was, we came out with our like a pothole design with the pothole in the shape of Minnesota. And that was this year. And I think that I think the design is really good. But you know, you know, we all understand the whole pothole thing. And every spring we get those, but not everybody might want to wear that on their shirt.

Stephanie Hansen 7:22
Yeah, exactly. Just coming out a pot of all season. All right. So if people want to purchase this or get involved in this subscription box, where should they go? Just go

Dan Gordon 7:31
to Minnesota awesome.com. And there’s a link right at the top of the page that just says brewery shirt club bucks or subscription?

Stephanie Hansen 7:39
And does it cost the brewery anything to participate other than the offer that they have to provide?

Dan Gordon 7:45
No, it doesn’t cost them anything. We partner with them and design it with them. And you know, they get out we promote their brewery on social media, and kind of in exchange for use of their designs. I love

Stephanie Hansen 7:54
it. I love it. And you could expand this into other things like I don’t know, makers in Minnesota box and makers in the box every month and a hot sauce club. Like I think this subscription thing is pretty fun.

Stephanie Hansen 8:07
Those are great ideas. All right. Well, it was great to talk to you and congratulations on your beer box. I think it’s super clever. And I wore my shirt proudly that you sent me so I’m excited to help you promote this and thanks for being on the makers of Minnesota podcast. Oh, yeah. Thanks

Dan Gordon 8:23
for having me. Appreciate it.