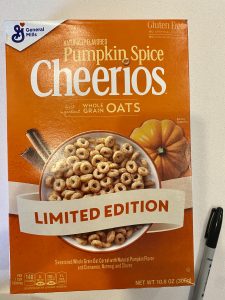 I am crazy about pumpkin spice. The first time I had a pumpkin spice Latte at Starbucks, my mind was blown. The Latte’s flavor was like the perfect Fall day but in a cup that I could hold. I have always liked warm spices like cinnamon, nutmeg, cardamom, cloves, and ginger.

Each year I try my share of Pumpkin spice items because, let’s face it, the world has gone Pumpkin Spice Crazy and turned it into its own holiday. At least it’s fun. Here are a few items that I taste tested for Fox 9 and my rating on a scale of pumpkins – 1 being don’t bother and 5 pumpkins being fantastic

Pumpkin Spice Cheerios:
These tasty little morsels were great. Not too sweet with a bit of a clover flavor that I really enjoyed, and with milk, I think they will be fantastic. I appreciated how they complemented the oat flavor of Cheerios.
5 out of 5 Pumpkins 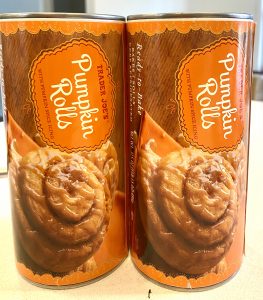 These quick refrigerated rolls are similar in style, texture, and preparation to Trader Joes Cinnamon Rolls, except these have a maple pumpkin spice flavored icing. These would never replace a delicious cinnamon roll for me, but these will do just fine if you are doing the pumpkin spice tour.
3 out of 5 Pumpkins

Sugar Plum Pumpkin Spice Almonds:
I thought these were a great snack. The almonds bag was gluten-free and not full of gunk, just almonds, sugar, nutmeg, ginger, allspice, and cinnamon.
I would love to eat these on a salad with apples and a Crisp Apple Maple Vinaigrette or tossed on a pumpkin squash soup as a crunchy garnish.
5 out of 5 Pumpkins 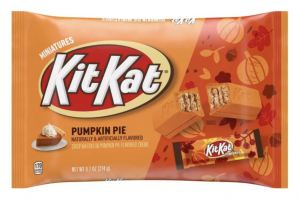 Pumpkin Pie Kit Kats:
Kit Kats are a massive phenomenon in Japan where there have been over 300 different flavors, including green tea, soy sauce, cherry blossom, sake, crème Brulee, and ginger ale. The Pumpkin Spice Kit Kats were just not good. So cloyingly sweet and tasted like maple syrup, I actually spit mine out.
1 out of 5 Pumpkins. 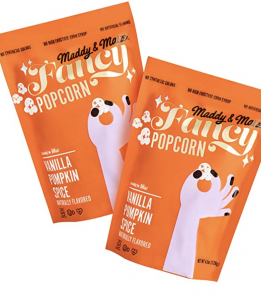 Maddy and Maize Vanilla Pumpkin Spice popcorn:
Popcorn is one of my favorite foods, and many of the flavored kinds end up being one-note. Not this popcorn. I really like many of the Maddy and maize flavors (Raspberry Lemon is particularly good). My only with on this would be a bit more salt to balance the sweetness.
4 out of 5 Pumpkins

Trader Joes Pumpkin Spice Pretzel Thins:
These festive pretzels feature a yogurt coating with crushed pumpkin spiced pumpkin seeds. These will hit the salty, crispy, crunchy snack urge, but they are a bit on the sweet side for me.
3 out of 5 Pumpkins

Trader Joes Pumpkin Pie Spice Ginger Brew
A spin on a perennially popular Trader Joes’s Ginger Beer, this concoction features all that you love in your pumpkin spiced coffee in a Ginger Brew. 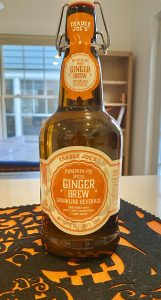 This base is a fizzy, mulled apple cider- with a generous amount of ginger purée & plenty of pumpkin pie spices including cinnamon, cardamom, nutmeg, allspice, & clove with a bit of cane sugar. This makes for a delicious seasonal Moscow Mule when mixed with vodka, a squeeze of lemon, and a cinnamon stick.
4 out of 5 Pumpkins