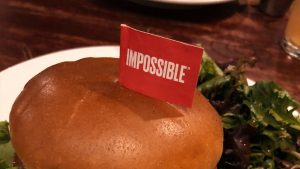 The wave of “meatless meats” is achieving mainstream status. Whether you are at a full-service restaurant, Burger King, Cub Foods, or Whole Foods, you are likely to encounter plant-based “meatless meats” like Impossible Foods and Beyond Meats meatless burgers, sausages and meatballs.

What are “meatless meats?”

These are products made from plants that are meant to taste like meat, be marketed to meat-eating customers, and replace some of those customers’ meat purchases. They are not solely marketed to Vegans, for example. That’s what makes them different from veggie burgers, which have typically been aimed mostly at vegetarians. Many times they are topped with bacon or accompanied by cheese and mayo.

Are they better for you?

The Beyond and Impossible burgers aren’t exactly healthy, though they’re not more unhealthy than the meat products they’re displacing. Health effects are a significant misconception when it comes to plant-based foods. Plant-based means it is made of ingredients that come from plants. However, this doesn’t mean you’re eating a salad – these are still processed foods.

No. As more consumers demonize carbs and grains and embrace the Keto and Paleo lifestyles, meat consumption is increasing. Also, globally, as the world does better financially and markets open up, you see more cultures adopting the “Western Diet.”

Is meatless meat better for the environment than regular meat?

Plant-based foods have the potential to have a vastly lower carbon footprint. In general, you have to feed an animal 10 calories of plants to get one calorie of meat, so you can expect plant-based foods to have about a tenth of the carbon costs of animal-based foods. Meatless meat can make a massive difference for the environment by almost every metric, including land use, water use, and fighting climate change. But, right now, the entire meatless meat industry makes up less than 1 percent of the product volume of the meat industry. So as meatless meat remains a niche industry, it simply can’t affect the climate because it’s too small to matter.

Plant-based meat has the potential to be great for the world:

If plant-based meats can end factory farming, be more sustainable, address global warming, and offer a way to feed a growing middle class its favorite foods without destroying the planet along the way, it is too good to be true. As it matures as an industry, its offerings can get cheaper, healthier, and more varied, too. Plant-based products are one of the more promising efforts to make our food system a little bit better.

Where can I find plant-based meat in the Twin Cities?

(*Denotes burgers I have personally eaten)

The Dirty Secret. Two non-meat patties, special sauce, lettuce, “cheeze,” pickles, onions, on a sesame seed bun. In other words, a Big Mac, done up for the plant-eating crowd with Beyond Meat patties, a slice of yellow coconut oil cheese, and egg-free mayo. 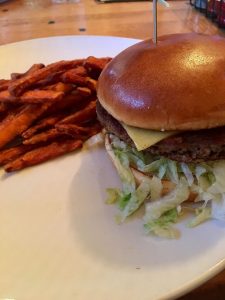 *The Howe – ALL-AMERICAN BEYOND BURGER with Beyond Meat and 16 Chao vegan cheese, shredded lettuce, red onion, house pickles, and vegan 1000 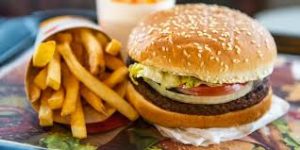